The house that is now Barkhill Dental Clinic was built as far back as 1720. It has encompassed many things, such as being a family home, a school, then first a small and finally a large “full house” dental practice that it is now.

The name “Bark Hill” is said to be originating from the bark of the trees from around the area, which were used in the local tanning industry at the time of its built.

In November 1989, Dr Ian Wellings bought Barkhill which back then was a family home with a small one room practice including a small waiting room. It had one parking space and was mainly a NHS practice.

He began to provide dental implants in 1990 and bought the first X-ray machine (for panoral radiographs) for the practice.

In 1992 a waiting room and a toilet were added in what is now the garden surgery at the end of the left corridor, in which the dental hygienist and therapist work. Before this, patients had to share the private family toilet downstairs.

In May 1994 Barkhill Dental became a fully private practice with working days from Monday to Saturday.

In 1998 the private residence was moved to a different location and so the conversion of the mainly family home into a full dental practice began in 1999. The first phase of clinical expansion was completed in 2000 when the waiting area was converted into the two garden surgeries. The old, first surgery remained in what is now the family/play area. The kitchen of the family home became the sterilisation room and the X-ray room was part of the old dining room which is now the main waiting room. The living room became the reception.

The space was designed so that all clinical areas were on the ground floor and office space and staff facilities were on the upper floors. Together with storage and the in-house dental laboratory, the garage was also moved and the garden converted into 12 on-site parking spaces. It was another two years before the large extension was completed and the room which is now the surgical room and Dr Ian Wellings’ surgery, at the end of the right corridor, opened up. The final phase extension of the Endodontic room with the microscope began at the beginning of the recession in 2008 and was only finally completed in 2011.
Refurbishments, decoration and modernisation were done in 2012-13 with creation of the family room, the staff training room and new office space upstairs when the lab was moved off site. 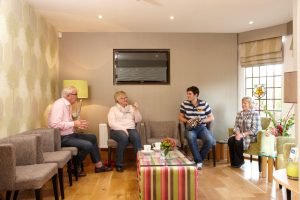 BOOK AN APPOINTMENT
Have a question?

Fill in your details below and a member of our team will get in touch with you soon.